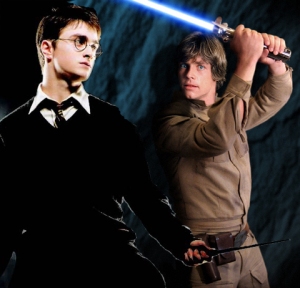 I do not really claim to be a huge fan of the Harry Potter movies and books and what not but over the past few weeks Chelsea has convinced me to give them a try and watch them in order to get ready for the release of the new Harry Potter movie. But I can not help but notice some great similarities between the Harry Potter series and Star Wars. And being a good fan of Star Wars I feel that everybody should know.

First and foremost wizardry is the same as “the force”. Also there are 2 sides to each which they must learn from their special schools and their mentors how to use their powers right and not let the “Dark Side” get to them. Luke’s school was the Jedi Temple and his mentor was Yoda. And Harry’s mentor was Dumbledore and he studied at Hogwarts School of Witchcraft and Wizardry. So you can say that Dumbledore is Yoda and is the head of their school’s.

Second Harry is pretty obviously the hero in all of this as Luke was in Star Wars. Even the background of each of the two is practically the same. Luke’s parents were lost to “Dark Side” as Harry’s parents killed by Voldemort. But if you really want to stretch it you can even go as far as saying Voldemort gave Harry some DNA or powers when Voldemort gave Harry that scar on his head. Anyways after the parents were taken away by the “Dark Side’s” they BOTH went to go live with their uncle’s.

You can also say that Voldemort is compared to Darth Sidious as the leaders of the Dark Side. Also Lucius Malfoy is comparable to Darth Vader as they are trying to either kill Harry or get him to the Dark Side of the force.

Harry and Luke used their weapons the wand and the Light Saber. Heck they even look the same and even more heck there is a giant scene in both movies where Vader and Luke get into an epic battle with their Light Sabers and they use the force to defend each other off and they also use color to distinguish which side is which just like it is in Harry Potter when Harry and Voldemort got into that epic battle as well.

They both  had trusted friends in which they gathered wisdom from Luke would use Obi Wan to get his information about the Force while Harry would go to Hagrid to gather wisdom with wizardry and magic.

Finally, they had sidekicks that went everywhere with them. Harry had Ron and Hermione while Luke had 2 sets of friends, C3PO and R2-D2 and Chewy and Han Solo.

So given the information from above and what I have even gotten from just watching the first two movies in the Harry Potter series and have being an avid fan of Star Wars this is how I feel that Harry Potter has ripped off Star Wars.

This site uses Akismet to reduce spam. Learn how your comment data is processed.